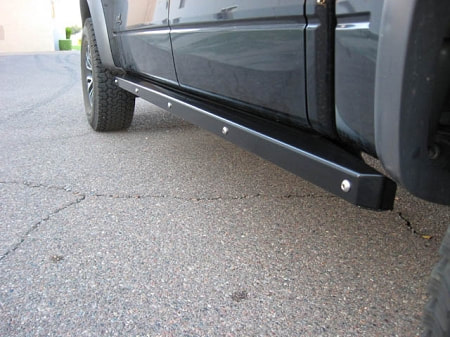 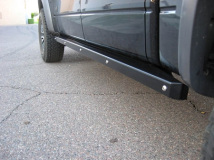 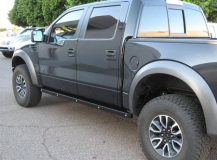 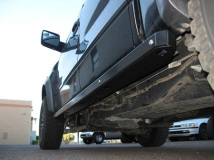 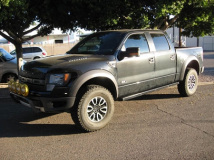 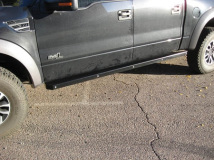 Jeep guys have been getting the benefits of body mounted rocker protection forever, now truck owners can too! Loose NO precious ground clearance, gives you a place to jack your truck, will not rattle bang or flex like frame mounted rock sliders, rocker guards and nerf bars. Rocks slide easily on the smooth surface and no tubes to get rocks stuck between. No welding or cutting! These will require an air powered rivet gun to install as they are solidly mounted with 3/16" high-strength alloy rivets. Sleekster Rockers are something new and different for trucks. Trucks are evolving and the parts and accessories need to as well. Sleekster Rockers are an alternative to welding tube sliders to your frame. They will give you more ground clearance and do not have large voids to hang up on rocks and things. They also will not flex and bang your body when running high speed off-road. The Sleekster Rockers are a formed structural member that distributes the weight over the strongest part of the body, they hug the basic shape of your existing sheet metal rocker panel and do not hang below it. The frame on your truck is made of roughly .125 material (and newer trucks are even thinner) and most guys think this is very strong, and it is when in a formed shape of a rectangle or what people like to call "boxed". Most guys like to think if they weld something to the frame it is then strong as well? The frame of your truck is not magic or made of an exotic material impervious to damage, it is just mild steel. If you weld tube sliders to your frame then the slider has leverage to flex the frame. The slider basically has to flex up until it hits the body when you jack or land on a rock. The body is supporting the weight OR the tube slider will continue to flex up 1-2 inches or more if the body is not there to stop it. This means the tube slider needs to be mounted over an inch below the lowest part of the body to keep from hitting the body. It is fine if the slider has a tube that matches the pinch weld and it is supported the entire length of the body, then it will support the weight of the vehicle. If your tube sliders come out from the frame and cross the body in a few spots, the slider will flex up and dent the body where the tubes cross it. Either way you will loose at least 3" of ground clearance, you will loose less than 1/4" with our Rockers. Our Sleekster Rockers are made from certified USA made A1011 .130 thickness material (thicker than most truck frames on the road and the same material or better). It is like adding a frame rail to the rocker portion of the truck, the Sleekster Rockers are a formed structural member that when attached to the body become one and very strong. Also think of it as if you cut your rocker out and welded a 4x4 .120 square tube in its place as long as it is attached to the body and supporting the entire distance it would be very hard to dent that tube or damage the body. A lot of "hard core" guys will actually cut out their rocker and replace it with tube and some will even raise this area and replace it with steel plate commonly known as "boat siding". Another way to think of it is like early Jeep guys bolting angle iron to the side of their Jeep. Now the newest Jeep Wranglers have multiple designs available to bolt to the side of their Jeeps, at the "pinch weld". The pinch weld is just where the upper portion and lower portion and sometimes a 3rd floor portion all come together and are pinched together and welded usually with dozens of spot welds, this is by far the strongest part of the body.

These Rockers fit Ford Raptors and F150's and are available in Satin Black powder coat. They are also available with a Tube Rail option for an additional charge.

ALL SALES ARE FINAL!